A Warm Welcome to Giannis Baxevanis 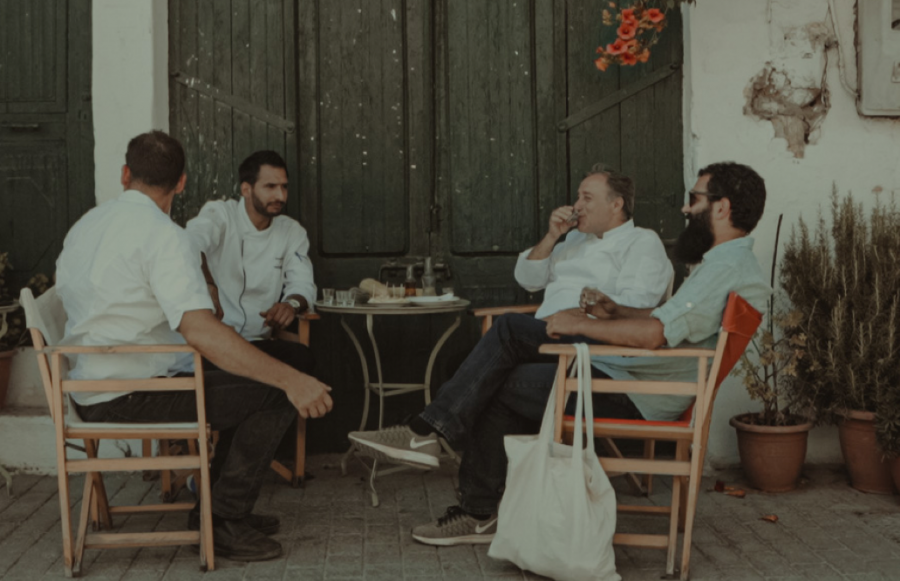 Giannis Baxevanis is one of the most well-known Greek chefs all over Greece and all over the world. He was born in Athens in 1962 and has a degree in Tourism Management. He is also fluent in French, German, and English. He has many culinary awards and published books with his own recipes. He also serves as the ambassador of Greek gastronomy.

Early in his career, after his studies, he kept traveling around many countries such as Germany, Switzerland, Belgium, and France. After that European tour, he returned to Greece where he was promoted to Head Chef in some of the most prestigious hotels on the island of Crete. These were Mirabello, Elounda Bay, Elounda Beach. In the meantime, his journey never stopped. He kept learning and expanding his knowledge by learning traditional recipes using amazing herbs like kritamo, radikio and moloha from old women in various villages around the island.

Mr. Giannis Baxevanis, made a purpose of his life to make the Cretan gastronomy famous all over the world. He is the ambassador of Greek gastronomy in France, New York, and San Francisco. For the last four years, in Switzerland, he organizes a 15-day Greek gastronomy festival with great response from the media. His immense experience is valuable to Greece since he is always promoting the culinary culture around the world with numerous exhibitions and achievements.

Do it Local, Know Us Better

The benefits of the Cretan diet are mainly based on the consumption of lots of olive oil, many legumes and wild greens, fruits (mostly organic) cheese, fish and red wine. Τhere is also low consumption in meat and eggs with high saturated fats. The Cretan – Mediterranean diet, is a very balanced one that offers wellness and health with tasty premium ingredients mixed for a spectacular result.

For this to happen, we started supporting the local agriculture market, by buying products directly from local farmers and birders who practice certified organic and sustainable farming. Fresh vegetables, local cheese, and premium meat are thoroughly tested before used with just one goal to amaze and intrigue every guest that seeks perfection.

Our philosophy is that people who travel around the world to experience each country’s food culture. Therefore, we are very proud to present you Greece’s best recipes and food habits in order to make you feel like a local during your stay in our hospitable island.

The brand new buffet menu was built keeping in mind the diversity of people’s needs regarding their eating habits. Our new menu provides options for Vegeterians and Vegans while respecting guests with allergies. Guests can identify what they eat with our specially designed food icon system. Armonia Eatery A la carte with its terrace is the ideal spot to dine, while  our snack bar will provide tasteful bites throughout the day. The whole project is based on the Cretan diet aiming in premium ingredients from local producers in order to reach the high standards of Mr Giannis Baxevanis. We want guests to experience our food culture as well as the Cretan hospitality.

The whole kitchen team with our local hotel chef Kostas Balatsoukas will implement the new menu in Main Restaurant, a la carte restaurant, snack bar as well as our Room Service.

Dimitris Pitarokoilis
View More Posts
Hello everybody. I am Dimitris Pitarokilis and I am the executive chef of Enorme Hotels & Villas. Since I remember myself I always loved cooking. After my culinary studies in Greece and abroad I worked as a cook and a chef in several restaurants all over Greece and was the owner of a restaurant as well. Additionally, I have been involved in catering for many years. I believe that a chef should travel a lot and taste as many cuisines and flavors as possible so as to expand his gastronomical horizon. My favorite cuisine is Italian and of course Greek and Cretan. I never stopped studying all the new trends of the culinary arts and I am trying to pass and involve our guests into this gastronomical journey. My passion for cooking throughout the years led me to Enorme Hotels & Villas team in 2016. From this position, I am trying every day to provide our guests with the best culinary experience during their stay.